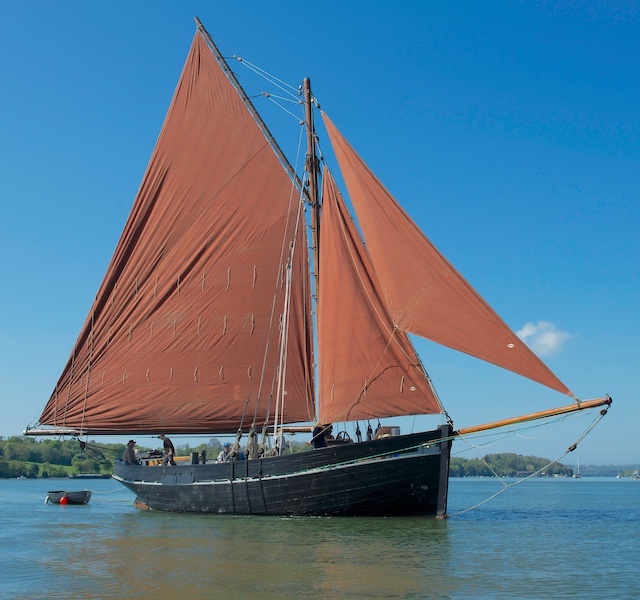 I made my second visit to see Lynher again at Voyagers’ Boatyard in Southdown Marina last week. She was safely ensconced, hiding out from all the recent freezing easterly gales and torrential, never ending rain. I felt pleased for her. Captain Dom met me, once again and gave me another tour around her to explain what had been happening since I had last visited.

Lynher was now looking at her resplendent best. Her black topsides, above the anti-foul line, was glorious to see, all painted a glossy black. Captain Dom’s young son Leonardo had painstakingly done a lot of this painting. It’s a family affair keeping this old girl looking her best! The dark amber coloured anti-foul paint work was also very nearly completed. Lying directly underneath Lynher, in the middle, was one of Lynher’s fabulous lady volunteers, the fab Fabian, kitted out in all her paint splashed blue PPE. All I could see of her under her full personal protection outfit was the sincere and intense conviction in her eyes that were just peeking out over her dust mask and under her beanie woolly hat and head-torch. She had a paint roller in hand and was finalising the antifoul, making sure she didn’t miss a jot of it. She paused briefly to return my thumbs up gesture and then straight back to the hard work again. Time was of the essence as Lynher was launching next week and there was still a lot of finishing up to do. There was a feeling of professional industriousness in the air.

Walking around the hangar carefully looking out for various trip hazards and standing back taking photographs as I went, one big change with Lynher was now very obvious to me. On my approach to the beam end of Lynher I found she had two propellers now! The original one, on the starboard side, had now been cleaned, rubbed down and now fully anti-fouled and on the other side was another shiny brand new one. The new prop was in a mirror image position and situated on the port-side. Captain Dom explained that each prop was set up to match the power output of each engine it was to be connected to. The Starboard, original prop was, of course, connected to Lynher’s Diesel engine already. The new prop would be connected to the brand new electric engine. The engine bay was now prepared for this new engine and Dom couldn’t wait for it to arrive and be installed so he could test it all out.

He told me that the props had been designed to rotate in opposite directions in a mirrored fashion. The starboard prop rotated right-handed and the port rotated left-handed. This would make Lynher much more manageable on manoeuvres as she was very skittish indeed. With only one prop she needed careful, expert handling when leaving her mooring in cross winds as she was so flat bottomed and slid across the top of the water with her “nose” and long bow sprit going the opposite way than was wanted. When Captain Dom first helmed Lynher he found that the original prop, fitted by Charlie Force in 1999, was set to rotate to the opposite way-i.e left-handed, which could easily send her dangerously flying off in a circle so these new propeller changes were very exciting.

The new electric engine was expected to be able to motor all the way up the navigable region of the Tamar River as it should last for a good 2 hours when fully charged. I immediately started to imagine the tranquil experience this would give to any of Lynher’s new voyages in this less explored part of the river and it’s estuaries. This engine would run totally silently and she would arrive quietly unannounced up river thus meaning any wildlife in the vicinity might not be frightened off so quickly and be seen much more easily. What an amazing opportunity for the crew and the sailing guests. I couldn’t wait for my first voyage on her.

We then went up the sturdy wooden ladder placed half way up Lynher’s starboard side and stepped onto the plank stretched across and stepped down onto the recently painted smart grey deck. The obvious thought of “walking the plank” came to me and made me smile to myself! The deck was a lot clearer than my last visit as all the gubbins had been tidied away now it was all painted and this time I noticed the three large barrels fixed on there horizontally with huge bolts. One barrel was on the aft deck in front of the tiller and the other two were on the forward deck. I asked about them and their purpose. Well what a clever recycling idea I found them to be as well as being aesthetically pleasing! Each barrel was lined inside to be filled with fresh water and they were each attached, via newly installed piping, to each of the new three taps down below! Two of the taps fed the basins in both of the heads. The aft heads was in the main cabin for the guests and the forward one was within crew bunk room in the fore pick. Lastly the third tap fed the brand new butler sink in the galley. All mod cons –  just brilliant!

We walked around the deck and then descended below. This time we went down the ladder steps into the main cabin as the deck paint was now dry. Last visit I had to clamber down the aft hatch into the snug engine room to get in to avoid the wet decks. I looked around to see what was new here and saw that the long wooden central table was on its side and underneath it the boxed housing, running the length of the table, was all open and inside was the newly arrived bank of 8 x 6 volt batteries. A great place to hide them and all safely out of the way. They were in place to ready power the 48 volt electrical system.

I looked toward the galley area to the butler sink. So we could all wash up but what about the cooking side of things as nothing was installed yet in the galley area? Dom explained that an induction hob had been bought for the galley as one could now be put in due to the electric conversion that had taken place. This would not only be more economical to use but also safer as induction hobs are cool to the touch once any pan is taken off the rings so perfect for anyone inadvertently  putting their hand on it. A microwave will also be installed – great for hot soups and warming fresh bread. I could imaging the wonderful cooking smells wafting already! A much better use of the space than the large range cooker that had previously been there and creating much more room to move around the galley area.

Bobbed down in her full PPE outfit next to us was another wonderful lady volunteer, Jewel, who was quietly immersed in her mission to stain paint all the lovely wooden deck sides around the bunk areas. She was using a mixture of linseed and tar oil and it smelt and looked glorious. She is well named I thought: a jewel indeed as it was her I saw on my last visit, working hard painting the grey decks above!

I took a few more photographs and left them all to it to continue their good work. Next week is launch day – I will be on hand to report more then! Here’s hoping these gales have died down for that exciting day. ’Till next time..and my next blog..stay safe.