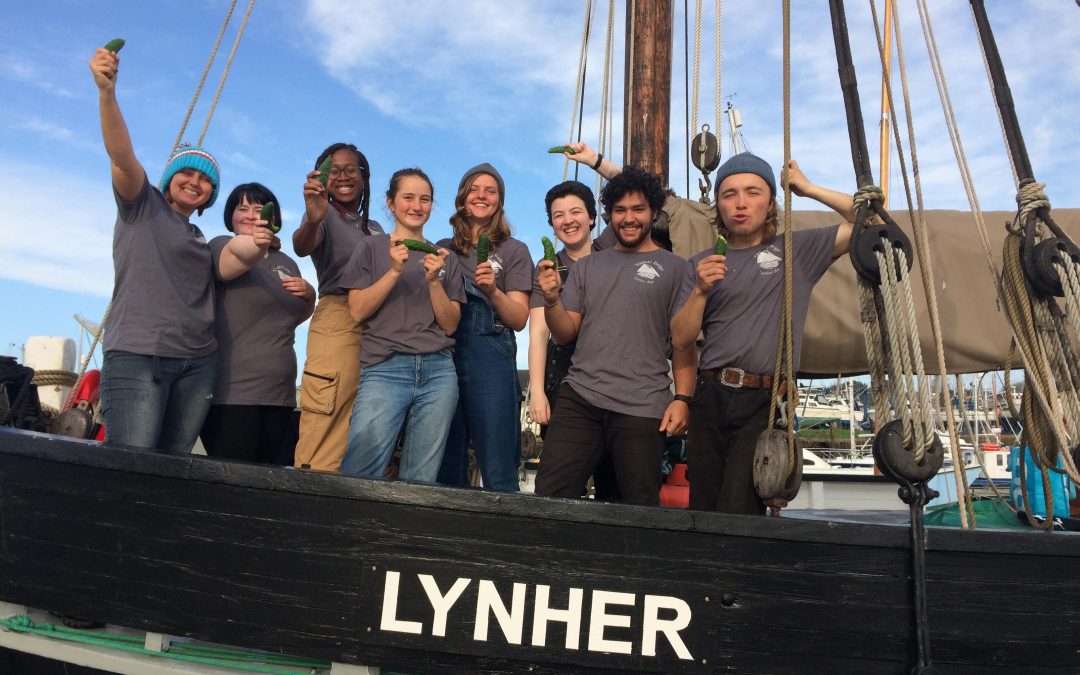 Well I can’t believe that it is the end of January already! My name is Amanda and I am the new girl on Lynher’s support team. I joined the Lynher CIC just before Christmas 2020 to help with the administration and promotion of Lynher and I immediately got busy learning all about her history.

Lynher came out of the water over the Christmas period and she went into the large hangar at Voyager Boatyard in Millbrook for her annual maintenance, upgrade and refit. I went to see her for the very first time last week, after reading and hearing so much about this incredible lady and her life so far. It really is a rags to riches story and against all the odds that she survived. Anyone that has anything to do with her gets very passionate and inspired by her tale and I could see why. It was a strange feeling I had while I stood outside the hangar waiting to meet her – best I can describe is  like meeting someone that used to be very famous but is older now but is still glamorous and held in high esteem.

Captain Dom met me and accompanied me inside the hangar and he waved his arm toward where she sat by way of an introduction. I stood still for a minute taking her in. Her beam and huge rudder was facing me. Her size drowned the other sea going vessels also undergoing various maintenance around her. I was astounded to see how wide she was in the beam and also just how shallow she was. Captain Dom told me she had a draft of only 3ft 6ins so no wonder she could navigate so high up the river Tamar and her estuaries. Having such a shallow bottom and a huge out of doors rudder also meant that they had to think carefully on where to moor her as she need to be away from busy areas with passing vessels and out of the wind as best they could as unloaded she slid and skimmed about in the water easily. He explained he normally had to tie the rudder up once moored as it would swing and bang about otherwise but this also meant the wind could catch it. I could visualise this as it is almost as wide as barn door!

We slowly walked around her, starting on her port side and Dom pointed out to me all the hard work that had already taken place. All her sides and bottom had been throughly rubbed back and smooth and were now ready for antifouling. Dom told me a very interesting scientific fact as we walked around together. The antifoul paint line is strangely high on her sides and does show above the sea-line when she is sailing in salt water. However when she is navigating high up river in the fresh water she sits much lower in the water and the waterline then meets the antifoul line. Good science fact – clever eh? 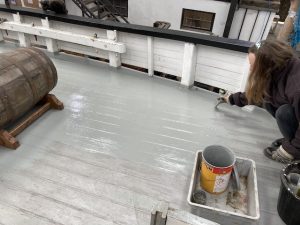 We then climbed the ladder all the way up to Lynher’s decks. I was going onboard! I tried to do this as elegantly as I could and as Lynher deserved. Swinging my leg over the top of the ladder I stood gently on her decks. Jewel, one of Lynher’s many passionate volunteers was already onboard and was painting the port side deck a lovely light grey colour. The main hatch was covered with all manner of bits and pieces, ropes and halyards, buckets, many different bottles and containers of all sizes and other materials all stacked on there so they could see the decks to paint them.

Dom disappeared down the hatch leading to the engine bay and beaconed me to follow him. The deck head height (new term to me as I called it the ceiling!) is very low there so I had to be careful as I got off the ladder and duck down. There Dom told me Lynher’s engine was housed under the boxing that took up all of the starboard area of the engine room. However he indicated that the port side area was relatively free and could house their new project idea which was an electric engine. If it was successful then eventually the old engine could come out but was all for the future to determine. All studies so far had been carried out and it had been decided to go for a 48 volt system.

We then moved through to the main cabin where the lovely large stained oak table stood centre stage and underneath that I was shown another new neatly boxed in area running the length of the table which would contain a bank of newly installed 8 x 6 volt batteries ready to power this new 48 volt electrical system. Dom explained that they were also hoping to install a solar mat above us on the deck to help charge these batteries. Also new down below was a beautiful shallow butler sink and pretty copper tap. Next to this was a space waiting for the new 600mm range style cooker. It was hoped that it could now be an electric one with an energy saving induction hob. The old full sized gas range had now been removed and I had seen it stored in the workshop in Cremyll waiting to be sold on. It must have taken up lots of valuable room and encroached on the customer bunk area so I couldn’t wait to see the new oven in its place. It would look very smart alongside the new sink.

Moving into the forward cabin, which acted as the crews cabin, I was shown the heads, which was a roomy space with good headroom and a very serviceable toilet with wooden seat. I was surprised to see no plumbing but Dom explained it was a composting toilet. Also inside was a newly installed, reclaimed small basin with the same style copper piping and tap that the sink in the galley area had on the other side of the bulkhead. The bunk area in there was of good size and could easily sleep 3 if not 4 crew. Dom pointed out the best bunk, which was forward into the bow on the starboard size about chest height. He explained that it was always bagged by his son Leonardo to sleep in!

My tour of Lynher was now complete and Dom was now needed to help Jewel on deck complete the painting. He explained that later in the month, Lynher would travel up to collect her spars stored at Mashfords Boatyard, Cremyll and once all refitted she would be back to her full splendid self and ready to sail the waterways again. I look forward to seeing her again then and I shall report all goings on in my next blog!